This section shows some of the work and negotiations done on behalf of horse riders in our area.   The subjects are not in chronological order, or indeed in any particular order, but will hopefully provide a good database and reference for future generations of riders.

If anyone finds a problem with the bridleways, please report it on the Surrey County Council Interactive Map.  You can also report it to us or get in touch with the British Horse Society local bridleways officer, either for Mole Valley, if you are in Surrey or West Sussex if you are there.

Please consider joining us – it only costs £10 a year and all of this goes towards maintaining our bridleways.   We have meetings every couple of months at The Plough, in Rusper, usually with a guest speaker, followed by an informal chat and discussions on bridleway problems.  We also have some extra fun events and try to do some snipping and minor maintenance on the bridleways.

There is no further update on this bridge and the parapet has been replaced.   Everyone is using it again (all traffic) and one wonders what all the fuss was about!!!   – PTD 26/11/13

The very busy and important Cudworth Lane bridleway bridge was closed to all traffic in November 2012 when Highways engineers deemed it to be very unsafe structurally.   However, following negotiations with Hannah Gutteridge, our Mole Valley DC Access Officer, it was agreed that it was safe enough to be kept open as a bridleway bridge only.

The lane is privately owned by the residents and most prefer not to have any through traffic.   The council are responsible for the safe keeping of a bridleway bridge, but not for a road bridge.

But the saga is ongoing and now everyone is using it again regardless, with no one accepting complete responsibility!

Sue Philipson – W.Sussex Access Ranger with her team of volunteers and some of our bridleways group members clearing vegetation and enjoying a well earned break! 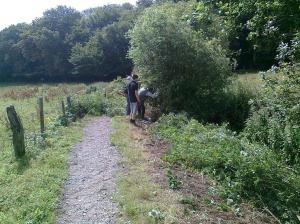 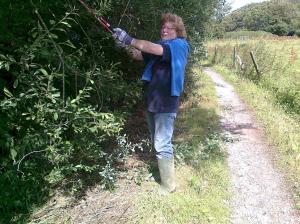 Unfortunately, later in the year after lack of farm ditch maintenance and very heavy rains, the surface of the bridleway was severely damaged.  Luckily for us, Sue Philipson and her team were soon back in action to make it all safe again.

May 2008 – The BHS asked Network Rail to update the safety and width of the bridleway crossing at Ockley, which was subsequently done.   The next two pictures show how narrow and uninviting to horses this used to be. 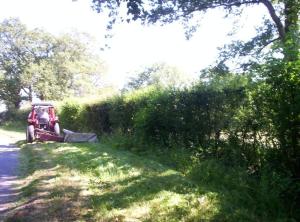 With regard to road safety, we lobby the Council to keep verges cut and available for all users.  The lanes are narrow so where possible, horses can then be ridden on the roadside verges.

Bridleway 310 north runs between Green Lane Farm in Newdigate and Dukes Drive.   Historically, it was part of the original road from Newdigate village to the ancient Home Farm.   Every winter it became too boggy to use, which is why the new east/west access, Duke’s Drive road was built by the Duke of Norfolk who owned the land in Victorian times.   The Council felt unable to spend money on having the old bridleway surfaced, but  Ray Haynes, who owns the field now, very kindly offered to do the work if we raised the money to pay for the road planings. 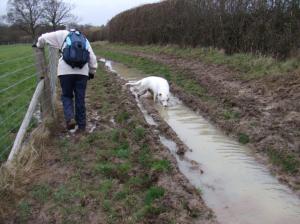 This is how the path through Ray Haynes’  field was in March 2008 before local riders raised the money for the road planings which Ray very kindly laid.

In August 2010, a really good all weather surface was finished and Ray was presented with a thank you gift.   A report and picture appeared in the Dorking Advertiser in October 2010.  This picture is shown on our title page!

The result was amazing and is now used by all members of the community – walkers, joggers, cyclists and horse riders.   There is still a small section to be completed, but since Ray’s illness and until the ongoing wet weather goes, nothing more can happen – winter 2012-13. 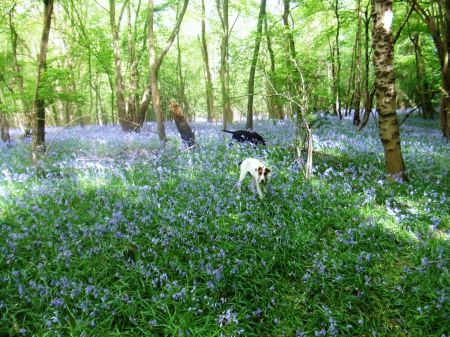 Glovers Wood between Partridge Lane and Russ Hill, Charlwood, has several really deep bogs along the bridleway.    Eventually, we hope that the Council will be able to afford to patch and drain them to allow all weather riding.

In early August 2009, Claire Saunders from SCC Access, arranged for much tree lopping and clearance to widen the path and let the light in which helped tremendously.

Unfortunately, since then, there has been “off-roading”, burning and fly tipping in the woods, so please would everyone report any suspicious activity to the police (dial 101 in a non emergency) who are keen to catch the culprits.    We are hoping there will soon be some sort of barrier/chicane to keep these people off the bridleway.

The Tanhurst Farm bridleway was closed for a year from November 2009 due to the big farm bridge being very dangerous.   In the past, the huge hole which had developed had  been temporarily covered with marine ply for a few years.   This had subsequently not only become extremely slippery, but was breaking up badly.   There followed much negotiating with the then owner who refused to repair the wide bridge, so the Council was forced into building a separate bridleway bridge alongside.   As it was on the boundary of the fields, it had to have gated corrals at each end.

The bridge was re-opened for horses in November 2010, but the boggy surface of the corrals then had to be given a safe surface the following spring when the land had dried out again.

Two separate riders came to us with the news of the state of this bridge in Rome Wood, near Rusper in November 2011.     It is important to report something like this to the Council who can then repair and make safe before it gets any worse.

These two pictures show how overgrown the vegetation can get.

They were taken in August 2012 along Beggarhouse Lane, a Byway (BOAT) between Newdigate and Charlwood.   Endless requests since May to get the Council to cut it back were unheeded apparently due to all workers being deployed by the Olympics.   Unfortunately, this was not a job which could be done by volunteers as it needed bigger equipment.   We hope to have our own team of volunteers to help cut back the vegetation this year, so that the problem does not get out of hand again. 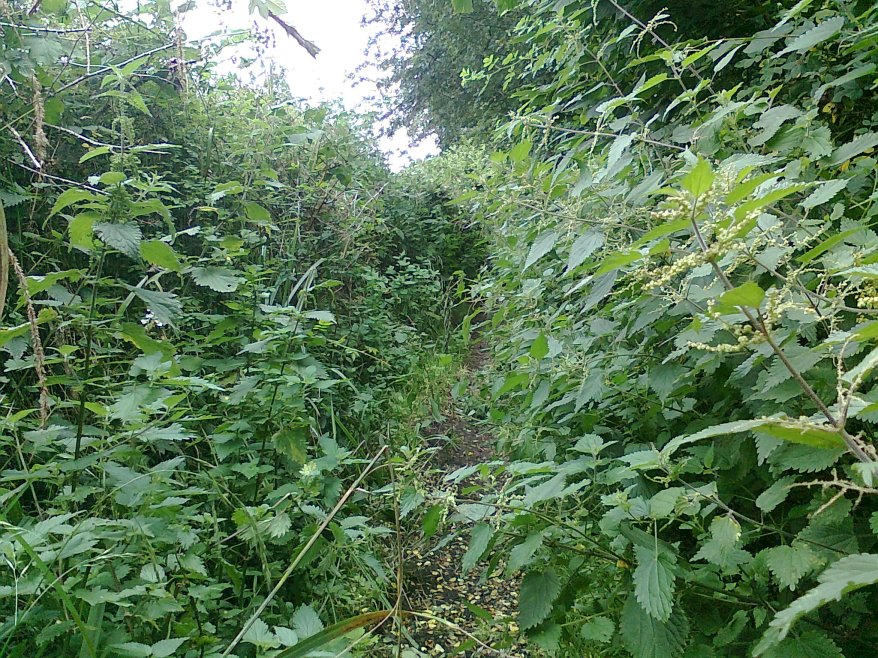 Following years of negotiations with Surrey CC Highways, at the beginning of October, 2012, we were really thrilled that this little D road, Ringers Lane, in Charlwood, was given a lovely all weather surface.

Previously, it had been impossible to ride or even walk along it due to major bogs and fallen trees, etc.   Now it provides a really useful link for riders going from the Ifield Road to Russ Hill, enabling them to cut out riding around and through the busy village.